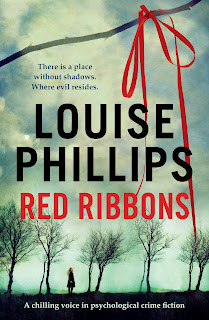 Red Ribbons by Louise Phillips went on sale on 3rd September and was launched very successfully at Hughes and Hughes in St. Stephen’s Green Shopping Centre on 5th September becoming a top ten best seller in its first week of publication.

You can find links to all of the other blog tour interviews on Louise’s blog here. Reviews have been excellent so far and there was a brilliant and extremely positive review on RTE Radio’s Arena programme by Arlene Hunt which you really ought to listen to here.

You can and should order your copy of Red Ribbons here or from any good bookshop!

Before we start with the questions, here’s a brief insight to the novel and a short note about Louise:

A missing schoolgirl is found buried in the Dublin Mountains, hands clasped together in prayer, two red ribbons in her hair. Twenty-four hours later, a second schoolgirl is found in a shallow grave – her body identically arranged. The hurt for the killer is on.

The police call in criminal psychologist, Kate Pearson, to get inside the mind of the murderer before he strikes again. But the more Kate discovers about the killings, the more it all feels terrifyingly familiar.

As the pressure to find the killer intensifies there’s one vital connection to be made – Ellie Brady, a woman institutionalised fifteen years earlier for the murder of her daughter Amy. She stopped talking when everybody stopped listening.

But what connects the death of Amy Brady to the murdered schoolgirls? As Kate Pearson, begins to unravel the truth, danger is closer than she knows…

Louise Phillips returned to writing after a 20 year gap spent raising her family, managing a successful family business, and working in banking. Quickly selected by Dermot Bolger as an emerging talent, Louise went on to win the 2009 Jonathan Swift Award and in 2011 she was a winner in the Irish Writers’ Centre Lonely Voice Platform, as well as being short-listed for Bridport UK Prize, the Molly Keane Memorial Award, and the RTÉ Guide/Penguin Short Story Competition. In 2012 Louise was awarded an Arts bursary for literature from South County Dublin Arts. Other publishing credits include many literary journals and anthologies, including New Island’s County Lines. Louise’s psychological crime novel, Red Ribbons, is published by Hachette Books Ireland, and her second novel, The Doll’s House, will be published in 2013.

It’s now a great pleasure for me to host this interview with my friend and fellow writer Louise who has made a huge impact with her first novel. So let’s get down to the hard questions.

What are the main things you learned about novel writing while working on Red Ribbons? And does your experience make writing The Doll’s House easier?

I learned that the first draft is simply that. Don’t expect it to be a work of literary genius – simply expect to have a beginning, middle and an end. I also learned that writing over a short time frame suited me better. The first draft of Red Ribbons, took 4 months and believe me, I wrote every available moment I had. I needed every available moment to get it done in that tight timeframe. But something happened within the intensity of the writing over a shorter more intense and intimate spell, the characters became alive and stayed alive, because I hadn’t discarded them for reality. I wasn’t completely happy at the end of the four months, I knew the work still needed a lot of editing, but that was okay, I had the starting point. I will do exactly the same with The Doll’s House. I have some work already done on it, but come October 1st, reality will be put on hold until the manuscript is done.

Will you continue to write poetry and short stories as well as novels or do you see yourself now as primarily a novelist?

I think I’ve always seen myself as primarily a novelist, in much the same way as despite taking a 20 year gap from writing, I knew I would write again. The short story format is a marvellous discipline, and yes, I will definitely write short stories again as some literary expression is best suited to this medium. As for poetry, well I don’t know. I never considered myself much of a poet, but then again, you should never really say never!

You were part of the Lucan Writers Group for many years. How valuable is it to have a forum to bring new work to?

I can’t speak for other writers, but for me, it was essential. I’m not saying groups have all the answers, in fact sometimes the advice you’re given can be way off base– but you have to learn that too, learn to trust your own instincts, to listen to advice, and then pick the nuggets that work for you, and in so doing, help to turn a piece that isn’t working, into something with possibilities. We all know writing is a solitary exercise, and if you find the right group, it can be a wonderful way, not only to nurture your creativity, but also to share time with people who have the same passion for writing that you have. And the real bonus is, you make great friends along the way. The writing journey is often filled with doubts and insecurities, and some fair minded writing pals are always good to have close by.

Did you let people see early drafts of your novel work-in-progress? How did their comments help form the finished work?

I’m going to now contradict the answer to the last question, because when I was writing Red Ribbons, I didn’t show it to anyone, at least not until the end of the first draft. I think it’s very hard bringing extracts from a novel to a group, as it’s impossible to appreciate the extract fully, without knowing the work up until that point. Also, having spent quite a while sharing work either in groups, or just other writers on an individual basis, I made the decision that this time, I would go it alone – just me and the characters, and it worked in a crazy kind of way.

A lot of people don’t understand the work an editor does with an author. What was your experience of working with an editor?

Well I got extra lucky as I had the opportunity of working with two editors. The first was Ciara Doorley, Commissioning Editor with Hachette, and then Rachel Pierce. Ciara was great right from the beginning, because she totally got what Red Ribbons was all about, and even though time was spent in the editing process, the soul of the novel never really changed. I would describe the first stage of editing as general suggestions and advice, but always ensuring any adjustment were a means of enhancing the script. The second stage, where along with Ciara, I also worked with Rachel Pierce, was more structural editing, and it was a fascinating stage for me. We didn’t agree on everything, and this was important too, because it was only when certain elements were questioned, that I fully realised why I had chosen one way over another. Some of the editing was hard work, but it was great fun too, and I learned a lot from both Ciara and Rachel, and I’m very happy that at the end of the day, even if not everyone might agree, the work is a better story because of it.

Is there any one piece of writing advice you have been given over the years that stands out?

Find your own writing space, emotionally and physically, even if it’s the tiniest corner, in the tiniest room.

From what I can see Red Ribbons would be ideal for a TV or Film adaptation. If you were given the opportunity would you write the screenplay yourself or would you let another writer take it on?

Actually, I don’t think I would. I’ve done some work with scripts, and loved it – the joy of working with pure dialogue rather than prose, the speed, the power, the sheer ability to change something completely by the use of half a dozen words, but, even so, I think the answer would be, no. Apart from the amount of work involved, and my desire to concentrate on novel writing right now, just as I don’t believe any two readers ever read the same book, I think another writer/writers could bring more to the work, filling it with even more possibilities, provided of course, the essence remains.

Congratulations again Louise on your huge success with Red Ribbons!