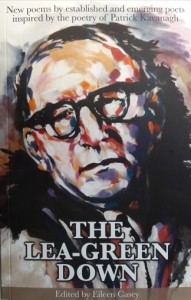 This Culture Night, Friday 21st September 2018, there are two events which feature the recently published anthology The Lea-Green Down (Fiery Arrow Press), edited by Eileen Casey.

Book launch at Tullamore Library, Co. Offaly at 4.30pm and all are welcome to attend. Offaly writer, Eileen Casey is editor of The Lea-Green Down, an anthology marking Patrick Kavanagh’s fiftieth anniversary since his passing and also, attempts to evaluate his legacy and his influence on contemporary poetry. Over 60 poets feature in the anthology, which also publishes the original Kavanagh poems, by kind permission of The Kavanagh Estate Trustees. Published by Fiery Arrow Press. Partly funded by South Dublin County Council and Offaly County Council.

Back in Dublin at Rathmines Library there will be readings from The Lea-Green Down between 6.45pm and 7.30pm. A gathering of featured poets will read from the works of Patrick Kavanagh, delivering their response poems and reflecting on the continuing influence his poetry has on generations of new Irish poets.

Brian Kirk was highly commended in the Patrick Kavanagh Award in 2014 and 2015. His debut poetry collection is After The Fall (Salmon Poetry, 2017). He blogs at www.briankirkwriter.com.

Jean O’Brien – In 2016, O’Brien’s fifth and latest collection, New & Selected: Fish on a Bicycle was published by Salmon Poetry. An Award-winning poet, she currently tutors in creative writing.

Eamonn Lynskey – His poetry has appeared in many magazines and journals. His third collection It’s Time was published by Salmon Poetry in 2017.

Mary Guckian is a Leitrim poet living in Dublin. Working on her fourth book of poems, she is also a photographer and her black & white photographs recently appeared in Southlight 21.

Phil Lynch is widely published. He is a regular performer at events and festivals in Ireland and abroad. In a Changing Light was published by Salmon Poetry in 2016.

Mary O’Donnell has published seventeen books of poetry and fiction. She is a member of Aosdána, Ireland’s multi-disciplinary artists’ organisation.